Luciferase (Luc) is a general term for a class of enzymes that catalyze the oxidation and luminescence of luciferin or fatty aldehyde in organisms. It comes from the organisms that can emit light in nature.he main application of luciferase in gene expression research is to insert the luciferase gene into the expected cell chromosome by molecular cloning technology, the stable expression of luciferase was obtained through the selection of monoclonal cell technology. Its luminescent principle is that luciferase and luciferase substrate consume ATP in the presence of oxygen and Mg2+ to produce an oxidation reaction, and part of the chemical energy is converted into light energy to release. Because there is no non-specific interference of excitation light, its signal-to-noise ratio is high, and its tissue penetrating ability is significantly stronger than that of green fluorescent protein (GFP).

In 1986, firefly luciferase gene was used as a reporter gene to determine gene expression.Because of its convenience, high sensitivity and high success rate, luciferase gene has been widely used as a reporter gene, including promoter activity, transcription factor, mammalian cell two hybrid tests, and in vivo animal imaging experiment. It has an important influence on many scientific research fields. Ubigene can provide stable Luc cell line to researchers. In addition to the stable expression of luciferase gene, the stable Luc cell line of Ubigene also has the advantages of strong specificity, high sensitivity, high imaging quality, accurate luminous intensity, and quantitative characteristics, which can allow researchers to track their cell lines accurately.

Bioluminescence imaging technology expressing biotinidase is the main method to study in vivo imaging of living animals. In vivo imaging technology can quickly and accurately screen and identify positive cell lines. The number of positive clones increased and the amount of luminescence increased, then the relationship between the number of positive cell lines and the luminous flux of the bioluminescent imaging system was discussed. The pMX-Luc2 plasmid was constructed by the molecular cloning method and cotransfection with pMD. G plasmid into 293T gag-pol cell line to obtain the retrovirus expressing Luc2 (Fig. 1). The retrovirus was used to infect mouse colon cancer CT26, human small cell lung cancer NCI-H446, human colon cancer HT-29, human ovarian cancer SKOV3, and human hepatoma SMMC-7721 cell lines to establish and screen Luc2 positive cell lines (Fig. 2). Different numbers of cell lines were inoculated in the culture dish, four nude mice were inoculated subcutaneously at different sites (dorsal or caudal vein) with 200μl different concentrations of SKOV3-Luc2 cell line. The luminous flux of the cell line inoculated in vitro and in vivo was detected by the bioluminescence imaging system. The results showed that the retroviral infection of Luc2 was a feasible method to establish the Luc2 positive cell line. The number of Luc2 positive cell line has a significant linear relationship with the luminous flux in the bioluminescent imaging system. 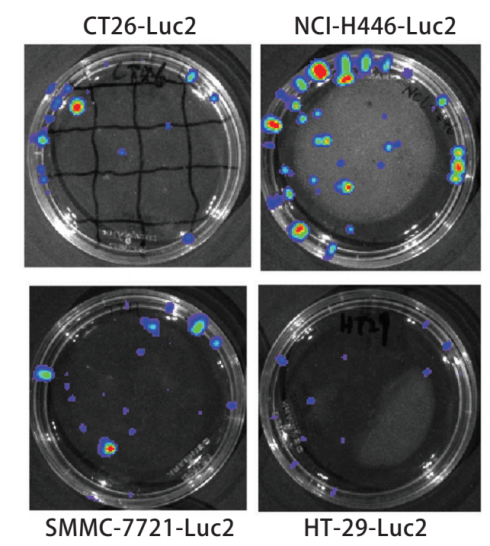 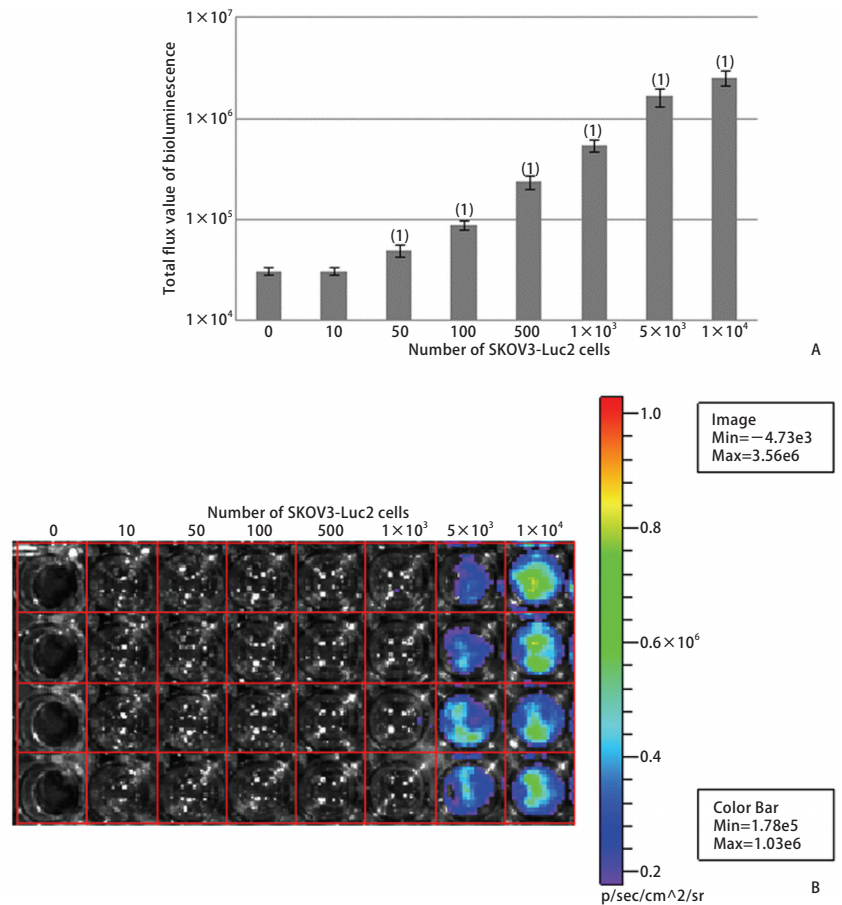 2.Verify the relationship between target gene and candidate gene[2]

To verify the relationship between FN1 (target gene) and MiR-96-5P (candidate gene), the sequence containing the binding site of FN1 and MiR-96-5P was cloned into luciferase reporter vector Psi-check2. Multiple comparisons showed that compared with the NC group, transfection of 100nM MiR-96-5P inhibitor significantly up-regulated the luciferase activity of cell line transfected with wild-type vector, but there was no significant change in the fluorescence activity of mutant vector (Fig. 3). he results of luciferase analysis showed that FN1 was the direct target gene of MiR-96-5P.

3.Application of the pathological research[3]

The insulin 2 promoter was inserted into the PGL3-Basic vector to construct the plasmid with the luciferase reporter gene and transfection into islets β cell line MIN6, glucose induction was performed to detect insulin secretion by dual luciferase reporter gene system [Fig 4]. In the case of using PGI3-Basic blank plasmid instead of construction plasmid as blank control, the detection value of luciferase does not change with the induction of different concentrations of glucose, but remained at a low level (Fig. 4A), indicating that plasmid transfection had no effect on the test. Renilla luciferase was used as an internal reference to removing the differences between groups caused by the experimental operation. The results showed that (Fig. 4B and C) the expression value of Renilla in each group was basically the same, and the changing trend of each experimental group was the same after removing the influence of internal reference value. 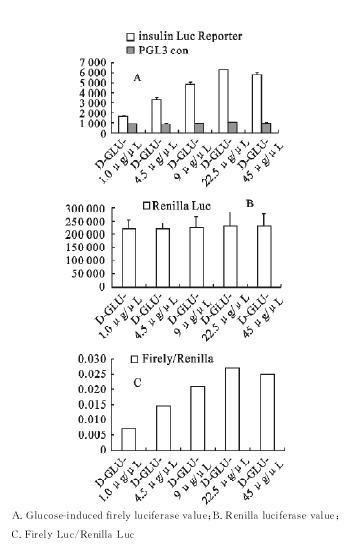 Figure 4 . Effects of different concentrations of glucose on luciferase expression

A single secretory luciferase reporter (SSLR) analysis method was developed and validated for promoter analysis. The method uses the early expression level of secretory luciferase associated with the test promoter as an internal standardized control for subsequent analysis of the same promoter (Fig. 5). SSLR analysis was compared with dual-luciferase reporter (DLR) analysis using HMGCR (3-hydroxy-3-methylglutamyl coenzyme A reductase) and LDLR (low-density lipoprotein receptor) promoter structures (Fig. 6). Similar results were obtained by both methods. Comparison of the reactions of HMGCR promoters in SSLR transient analysis is very advantageous compared to that of the same promoter in stable cell lines. 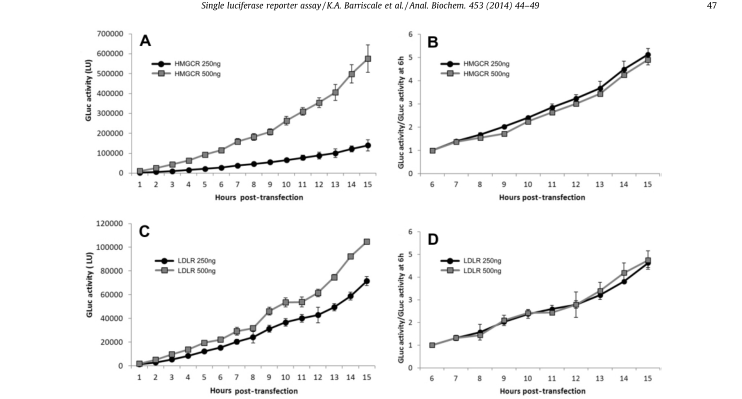 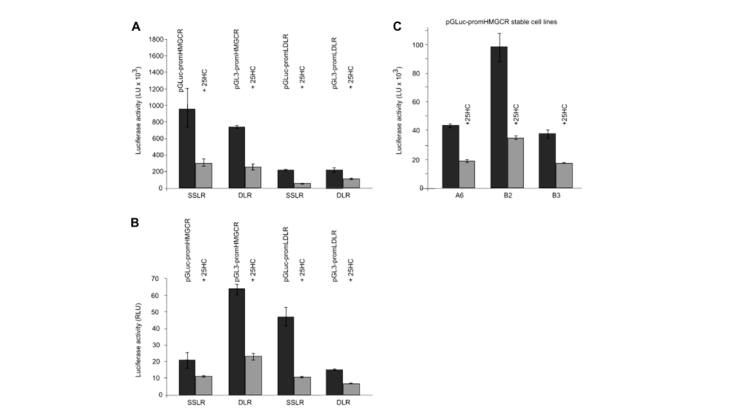 Luciferase cell line shed light on different biological fields. Therefore, Ubigene generated a list of high-quality stable Luciferase cell lines. They can be directly applied to in vivo cell injection to detect tumorigenicity of the cell line. It also has the advantages of strong specificity and high sensitivity, high imaging quality, and accurate quantification of luminous intensity, which allows researchers to track their own cell line accurately .